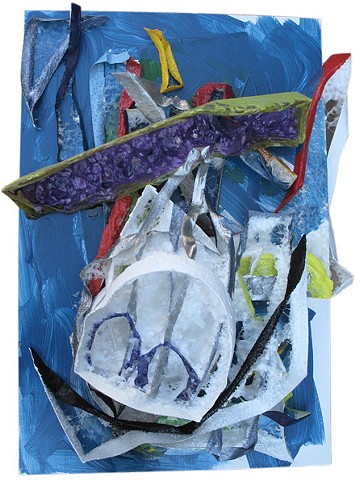 Following my graduation from Michigan State University, I secured a studio near my parents' home in West Michigan. It was there that I began considering how to create new surfaces to paint on. I remembered a printing project my friend Justin Smith had done where he melted styrofoam and used the marked foam to pull prints. I was also reminded of all the styrofoam cups and packaging I had melted with my mother's nail polish remover in our driveway as a kid. It was fun and fascinating just watching them collapse and disintegrate. My first work using polystyrene mainly used the unorthodox material to create a surface to paint on. The result was a pock mark scarred ground. These qualities were a result of addition of solvent to the polystyrene. It was at this point that I realized I had started to build a method of abstraction into my art making processes. Soon after my experimentation at home, I began my MFA program at Pratt. Following the first couple of intriguing results, I decided to focus on the material and see what I could discover and where it could be pushed. After a few weeks at Pratt, I noticed some paint on a piece of foam that had been struck with some solvent. What I observed changed everything. What I saw was a mark that resisted the solvent and also absorbed it. The mark stood but was twisted and bent, and previously latent brush marks had surfaced and were entirely visible. The negative space receded dramatically, placing moments within the marks on their own pedestals within the whole image. This breakthrough led and is leading to further development and innovation that I both isolate and combine to create my work. I rarely throw any unfinished work away even If I am not happy with it at the moment that I make it. I know from experience that there is a good chance something or some part of something I have begun will be integrated into another artwork. This could manifest itself in the form of a whole painting becoming an underpainting or as a piece being cut out from the old work and grafted into the new.